Last weeks post ended with the image below and I said that I would explain this week why the track over hung at the front and why the carved plaster board, bottom left, hadn’t been painted.

The depth of the base this diorama will eventually be fixed to is 20cm whereas the depth of the mine entrance just up to the over hanging track is a few centimeters shorter.  When I get to start fixing things in place on the base which comes with the perspex case the front will need to be built up and brought forward at which point the track will no longer over hang.

The unpainted plaster board on the bottom left will I hope become one side of a small stream.  Until I start fixing things into place this is something I cannot deal with properly yet and only when I can will I start to think about painting.

On to this weeks progress.

As I am not working to any kind of schedule I can’t really claim to be behind but nevertheless I had hoped to have had more done.  In fairness I achieved what I hoped to do this time last week but because I got it done quicker than anticipated I hoped to kick on a bit more.  Alas life took over and it didn’t happen.  What I did manage was to get the mine completely painted along with the track and the mine cart.  I say completely painted but in due course it will need to be blended with with the rest of the diorama and have more dry brushing done.

The mine cart comes empty so I filled it with some cat litter which once dried was painted too.  I also got a barrel done and a few scatter wooden planks although these are not stuck down yet in case I decide to place them elsewhere.  A couple of plants were added to provide a modest amount of colour t break things up a little.  I expect I will add more debris and scatter later on but until more of the overall assembly has been completed it is hard to see at this stage what is needed.  More is less springs to mind at this point.

A few images below. 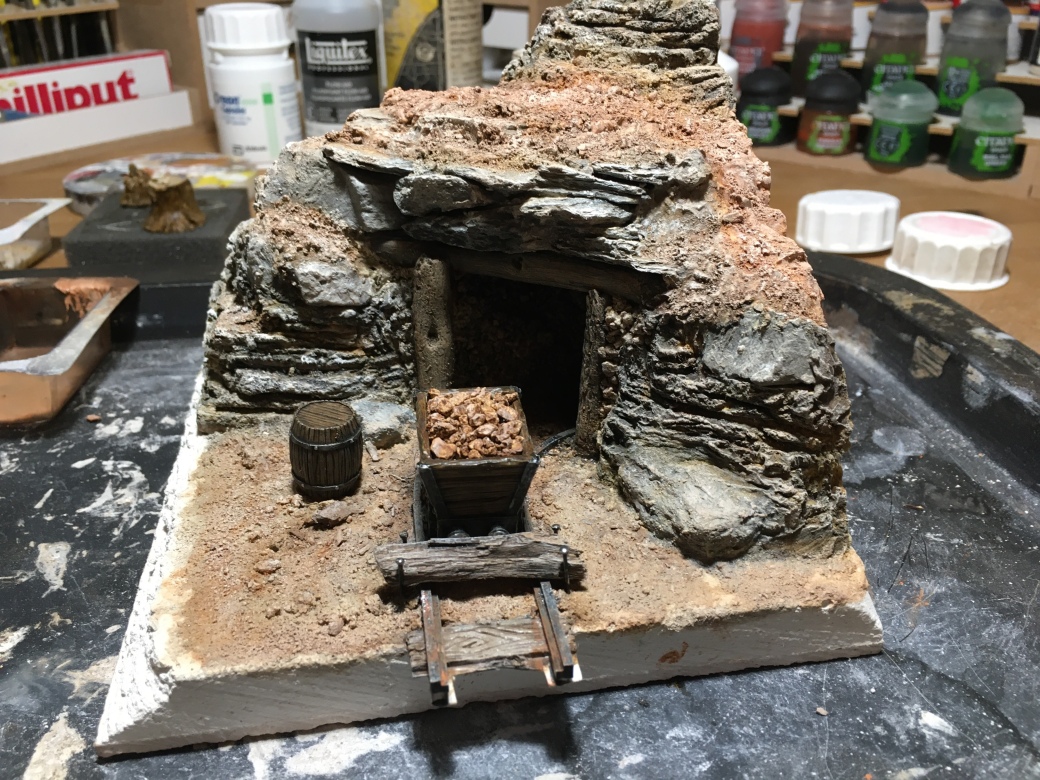 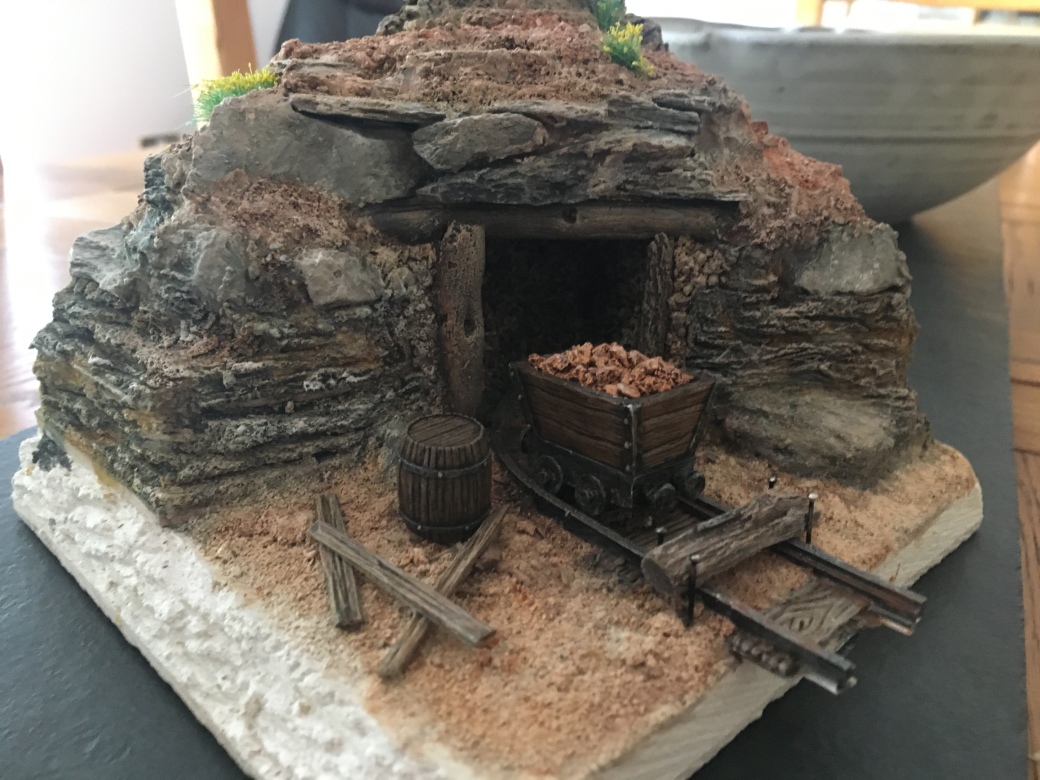 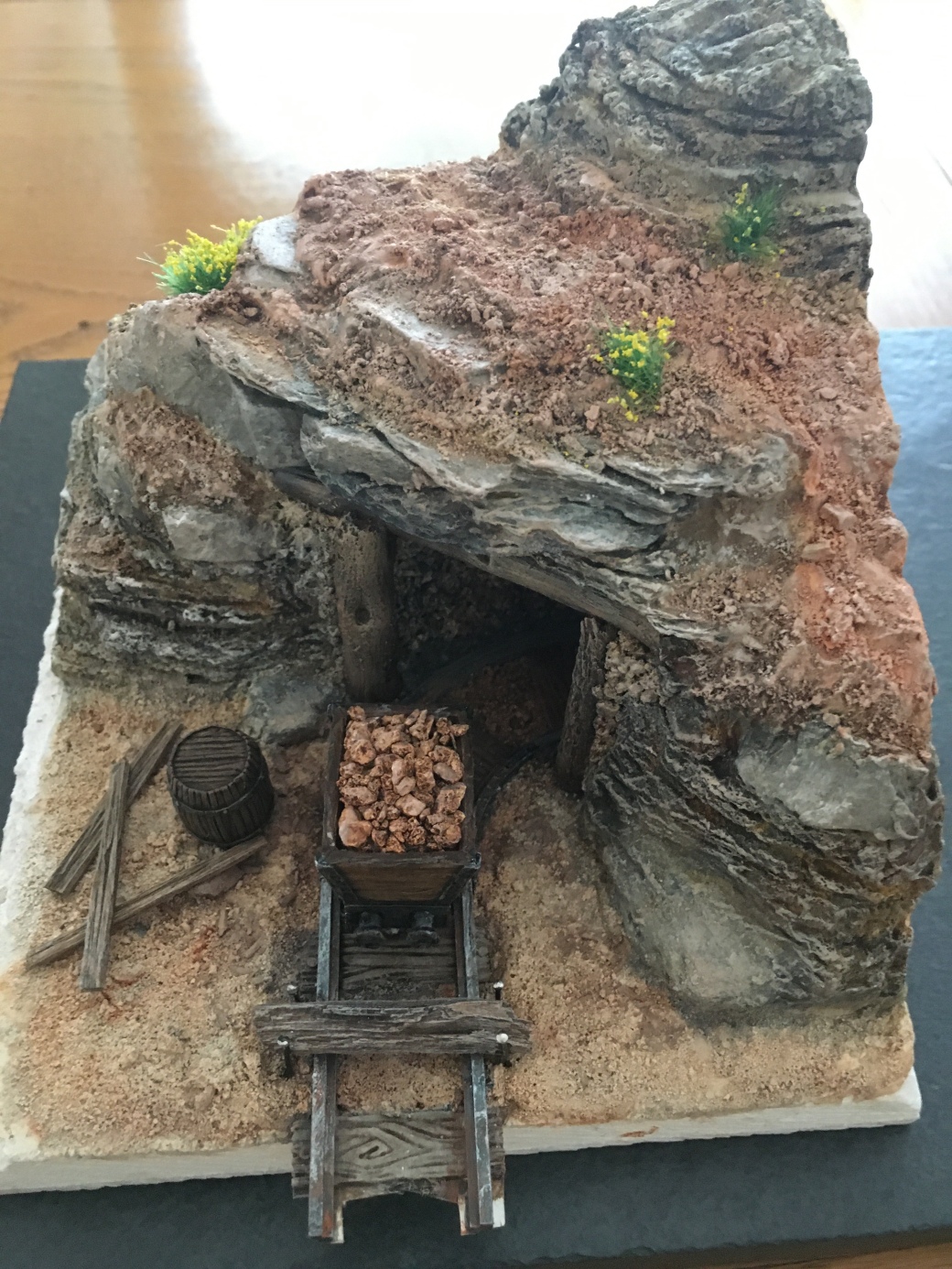 Finished for now but certainly not complete.  More work on this bit to be done but it is well on its way.

I did receive a couple of suggestions about having the mine lit up inside.  A great idea but looking closely at the stage I was at I couldn’t get my head around how to do it given what I had built so far.  In reality the mine isn’t that deep and the track turns to the right to give the illusion of depth.  What I did take from the idea though was the thought of doing a diorama at some point which was inside a mine or a cave.  I liked the idea of a dark place lit up but need to give more thought to the theme and figures.  In any event one for the future as I have other things lined up.

Next week my aim is to start painting the cottage.