Having completed two building projects I was ready to have a go at scratch building one.  I already knew that I wanted to build a Livery Stable and had in mind a rough idea of how it would look when completed.  To be fair the idea was based upon an old Britain’s Livery Stable (see image below) which I used to play with as a kid.

My first step was to put my design down on paper.  Having taken account of the base size, and working to a scale of 28mm equals 6 feet (and therefore 5mm equals approximately 1 foot), I drew the outline on graph paper (front, back and sides). Coffee stirrers were then cut to shape and using pva glue were stuck to card.  I used thick card, the type they use for making picture frame mounts.

As part of my design I intended to have a roof which could be removed in order to look inside, so coffee stirrers needed to be stuck to both sides of the cardboad. The one thing I had not accounted for was the contraction brought about by the pva drying.  As a consequence the dried walls curled up a little rather than lay flat. Had I weighted the sides down while drying things might have been better.  The problem wasn’t insurmountable but it became clear that I needed to redesign the inside slightly so that the sides could be braced and pulled together when assembled and glued.

You will notice from the images above that the inside was also painted at this stage as it was much easier to man handle the model and gain access to all internal areas. My next steps were to add the door frames, construct the winch system, build the doors and begin the roof.  Coffee stirrers were again used and cut to size. 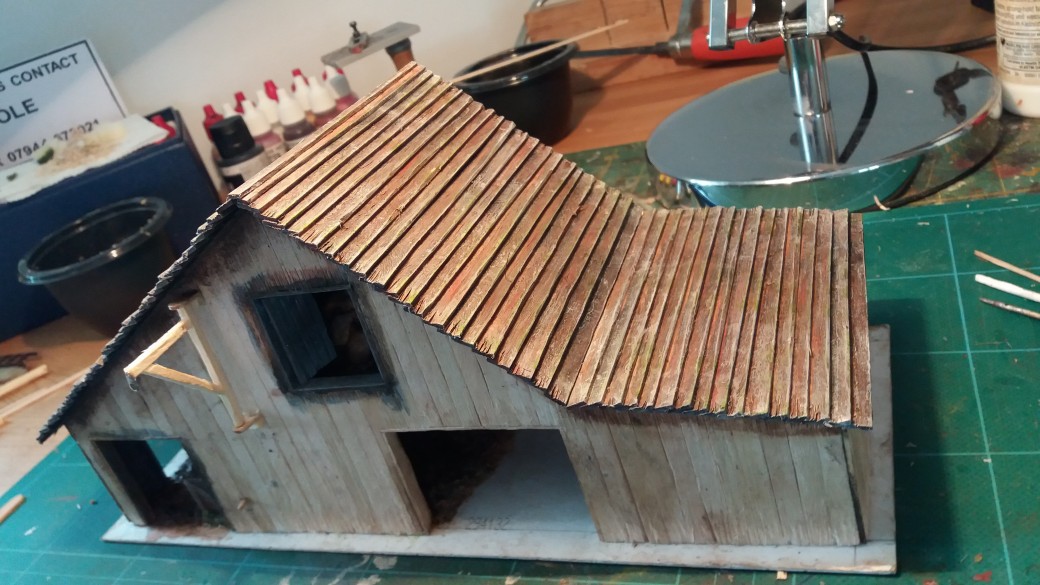 The right hand side of the roof as viewed in the above image was made to be removable while the left hand side was fixed.

The next stage was to paint the outside of the building but before doing so the wooden stirrers were roughed up using a wire brush and a modelling knife to add character which would become more obvious when the painting and dry brushing was done.  For painting I used a variety of different colour washes.  The washes were all created using various oil paints thinned out using white spirit.  I’m sure the purists would be horrified at the use of white spirit but I think the medium is great and use it all the time to thin and matt down oil paints.  The great thing about using real wooden coffee stirrers is the paint washes soak into the wood and in my opinion produce a nice finish.

With the building essentially complete attention was now directed to the figures and internal detailing.  The figures were mostly from http://www.dixon-minis.com – their Old West and American Civil War series.  Minor conversions were made to an artillery figure which was adjusted to pull the rope and the riden horse had saddle bags and a blanket added.

Ground work was essentially grit swept from the curb side and the greenery comprises of static grass, taller grass made from string and Seafoam Trees purchased from http://www.gaugemaster.com.  These trees are aimed at railway modellers but they are ideal for 28mm scale either as trees, bushes or climbing plants.  They are best painted with a diluted paint and then dressed with leaf materials applied using hair spray.

Images of the completed model appear below.

It was only after I had completed this model that I saw some images of roofs made of wooden shingles and thought they looked much better.  I decided that shingle roofs would be the next step towards improving my scratch built buildings.  More on this when I get round to publishing Building Project No: 4. 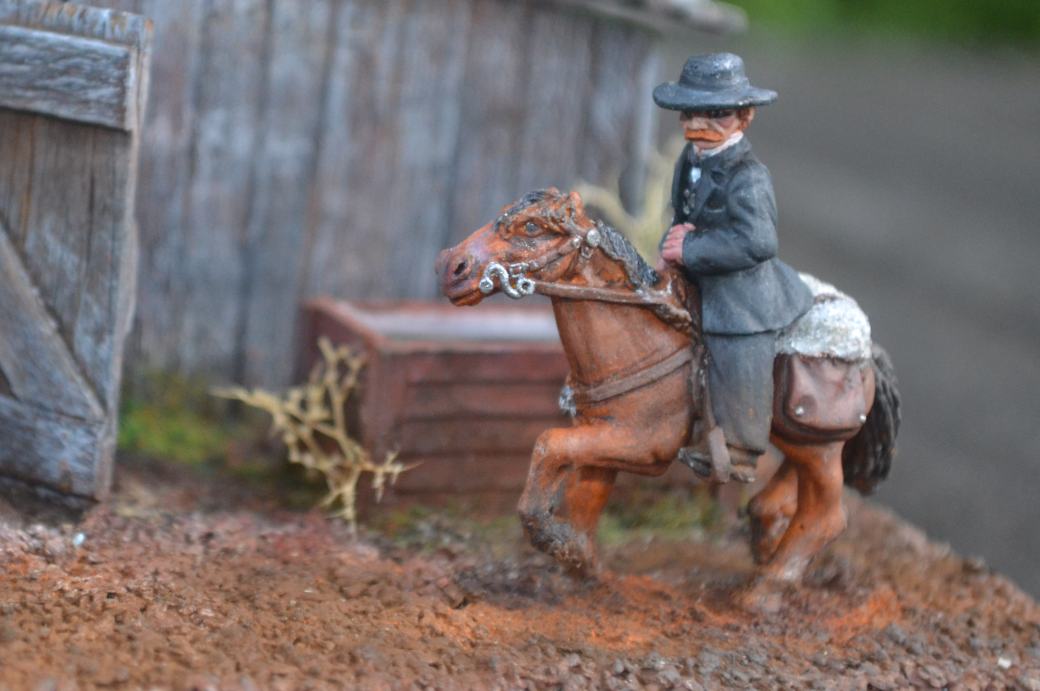 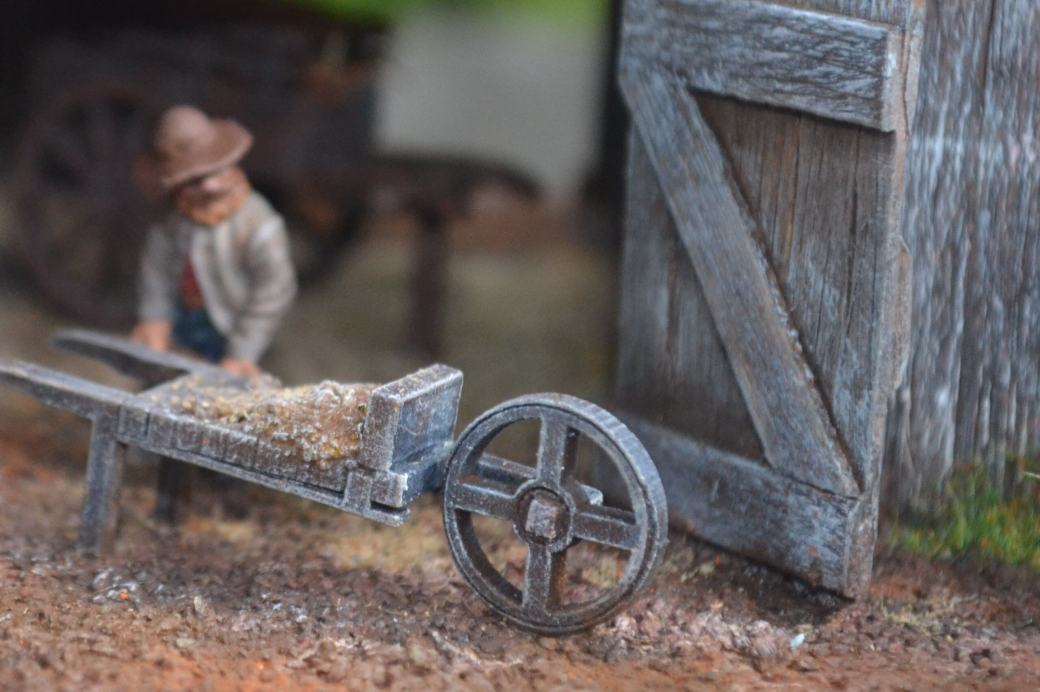 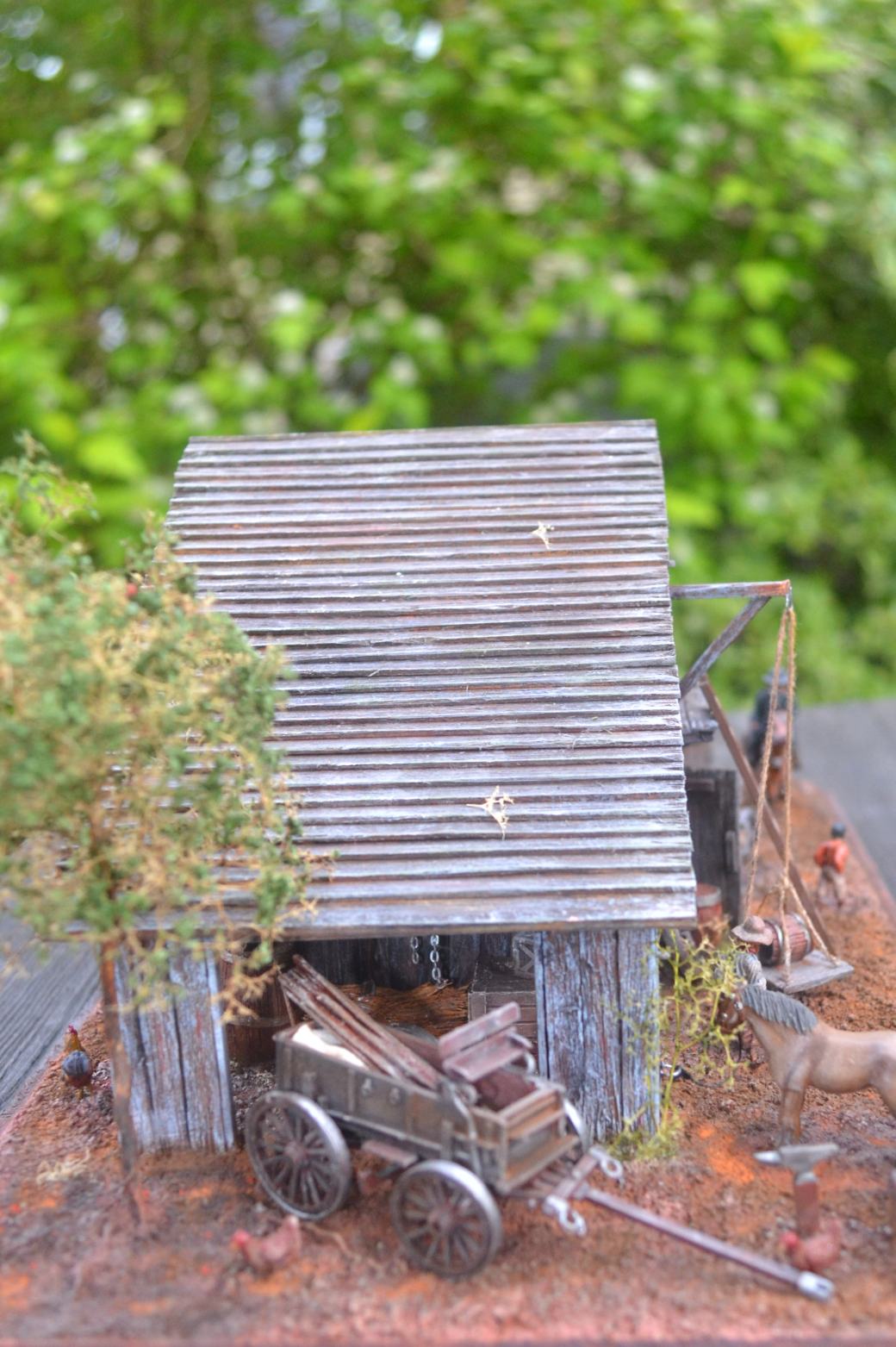 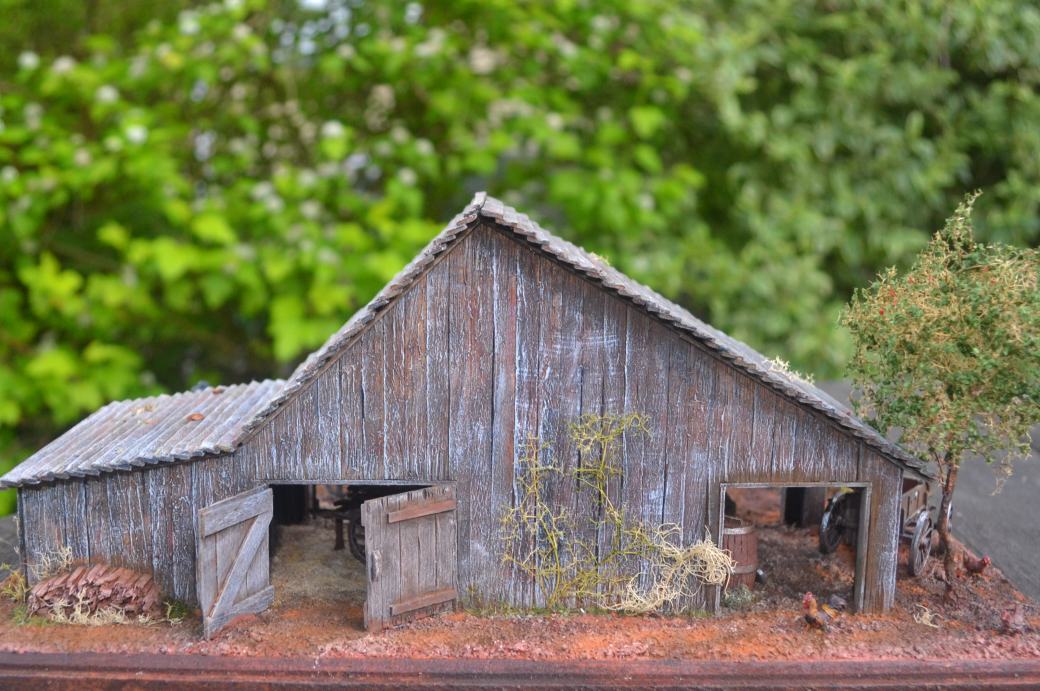