My third and final post for this weekend and the background to the first post on “How to Make Fir Trees”.

One of my favourite films is The Last Of The Mohicans staring Daniel Day-Lewis and Wes Studi.  I love the story, the cinematography and the sound track.  A winning combination all round.  Truth is from a very young age I have always had a soft spot for the Indians.  There is a reason for this and it is a true story.  Allow me to enlighten you.

My Grandfather on my mother’s side had three older sisters and back in the time of the Great War 1914 – 1918 the family lived in Windsor.  During the war the Canadians sent over an expeditionary force who were billeted in Windsor Great Park.  Many of these men were lumber jacks and native indians who were brought over to chop down trees to supply some of the timber used in making trenches.  Two of my Grandfathers sisters met and later married two Canadian service men and went to live in Canada when the war ended.  In the case of my Great Aunt Rose she married a man by the name Pete Commanda, a native north American Indian.  They spent their lives living on the indian reservation in a log  cabin on the shores of Lake Temagami, Ontario.  A story which has fascinated me from an early age.  For interest a couple of pictures below.

So, whilst trawling the Warlord Games web site some while ago I discovered a set of six figures based on the movie.  I couldn’t resist the temptation to buy them.  I decided they would make two models.  One, this one, would feature Magua on his own.  The other five figures would feature as the basis for a separate diorama.

One of my favourite sequences in the film is at the end when all the main characters are high up on the mountains.  Somehow I wanted to create a mountain scene, albeit with a degree of poetic licence. I wanted height, I wanted rock faces, I wanted fir trees and to aid the impression of altitude I wanted snow (the poetic licence bit as none featured in the film!).  I wasn’t sure how I was going to achieve this and even if I could I wasn’t sure how good a single 28mm figure would appear dominated by a 30 cm high base.  As a consequence the idea sat on my to do list.  Then I got some inspiration on how to make fir trees.  I still wasn’t sure how the overall model would look but then decided to hell with it, let’s give it ago!

The first step was to sift through my outdoor log pile for a suitable log.  This was followed by some saw work to cut away sections which would house the trees and the rocks.  The photo’s below show some of the stages in that sequence.  I then cast some rocks using Woodland Scenics molds.  While various things were drying and doing their stuff I painted the Magua figure.  The Trees were made following the “How To Make Fir Trees” article that I recently published.

Everything painted and dried it was then all about assembly, more painting and then applying the snow.  My overall impression is that it came out looking OK.  I think I achieved the depth of scale I wanted and if nothing else then it’s a little different.

Now to deal with the other five figures! 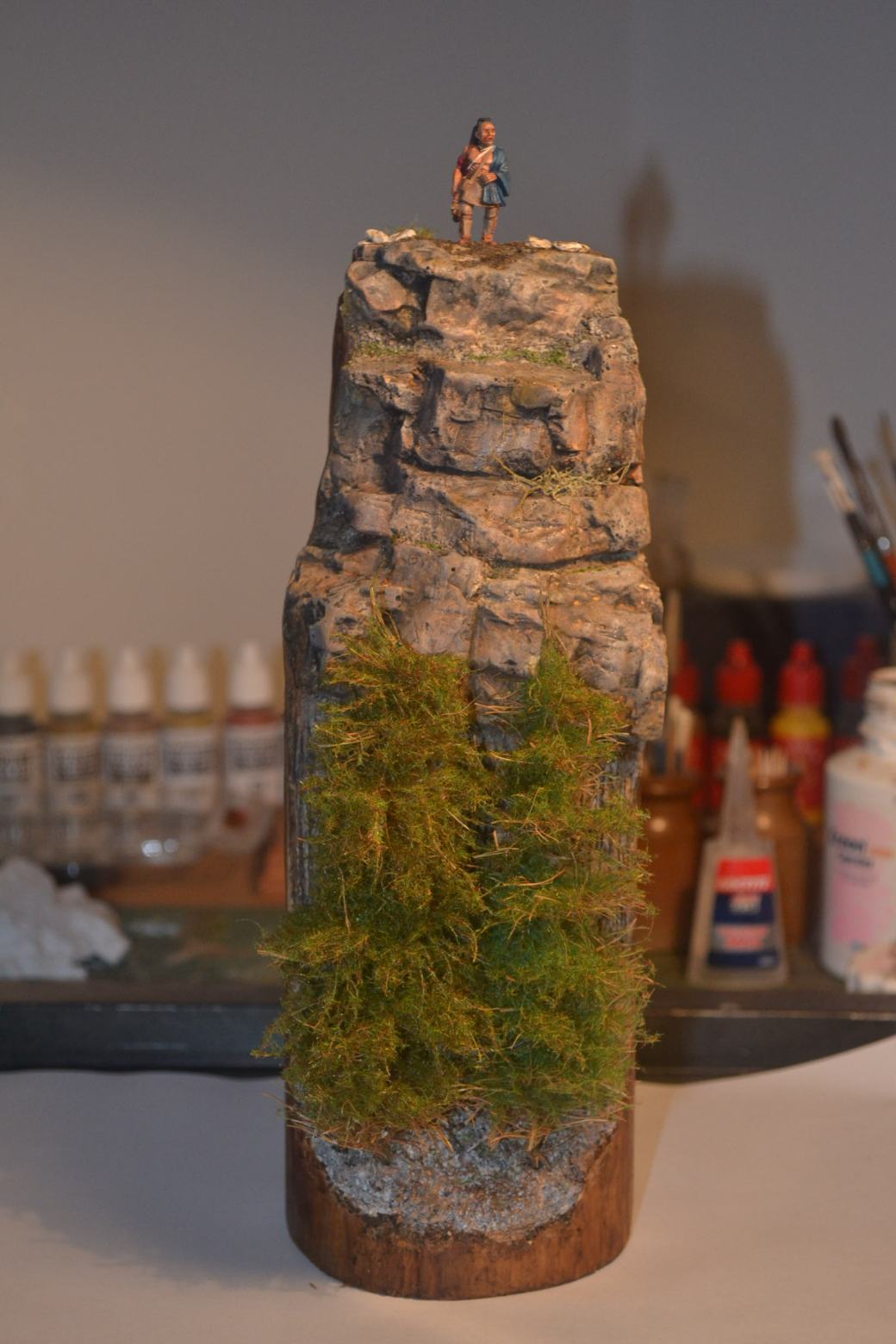 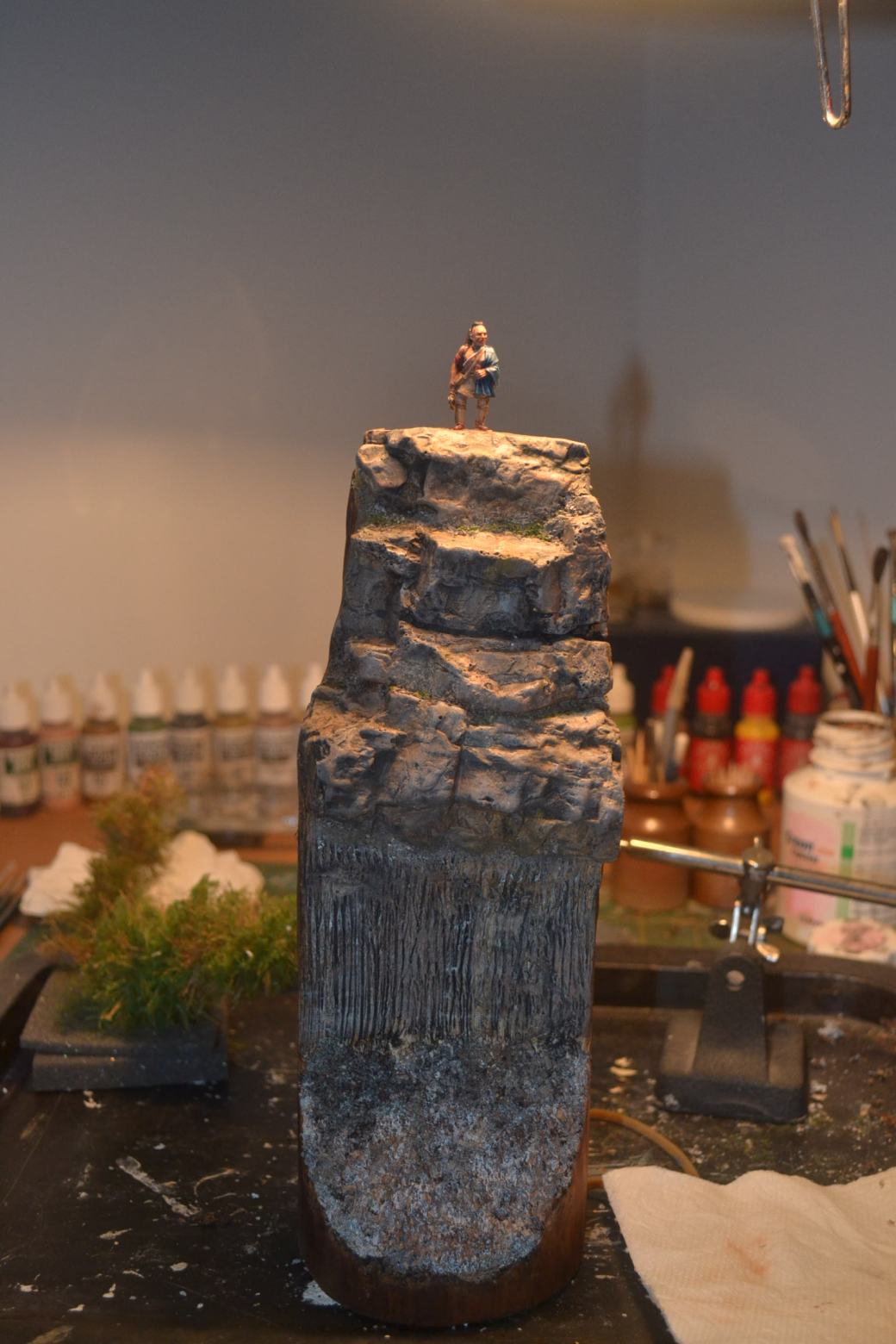 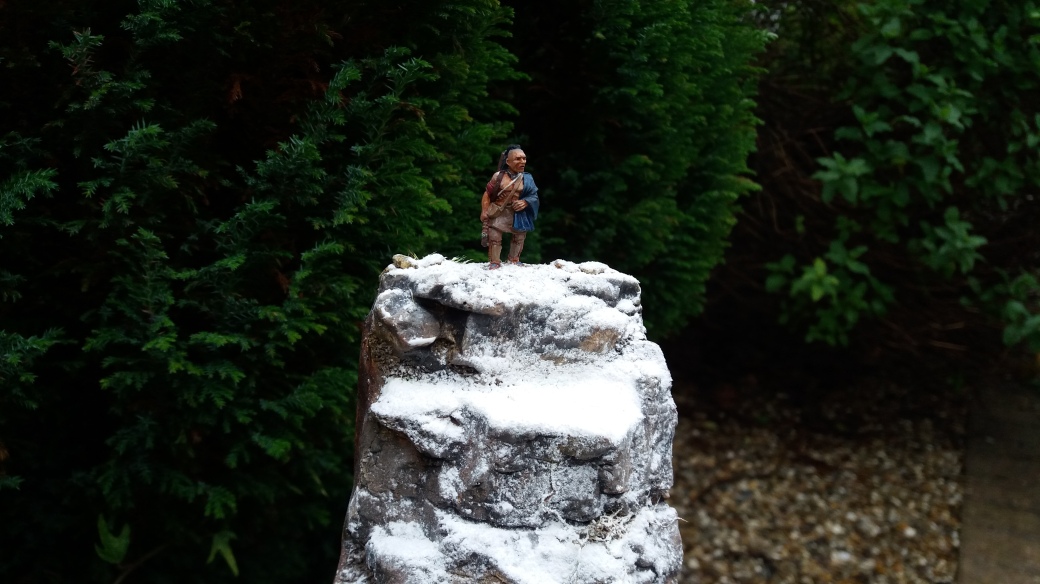 14 thoughts on “The Last Of The Mohicans – 28mm Magua Figure”