As luck would have it I managed to get a single figure done for this post.  Nothing exciting just a straight forward Knuckleduster cowboy by the name of Rowdy Joe Lowe.  I have a pile of Knuckleduster figures to work through so expect to see little else on the Mid Week Miniature post for a good few weeks.  Unless I get bored that is! 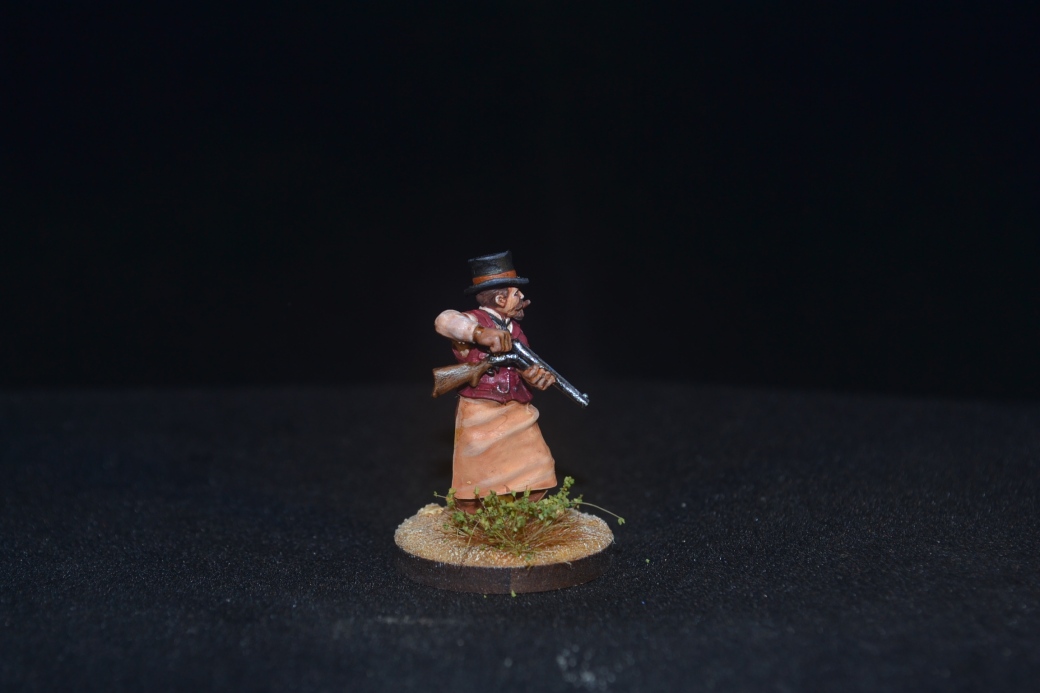 As mentioned in last weeks Miniatures & Musings, this week is mainly about my plans for 2020.  Like all plans I very much doubt it will unfold as I would like to anticipate it will but with creativity at the centre of it all perhaps it’s to be expected.

So, moving on what can you dear reader expect to be confronted with at the dawn of this new decade?  Well for starters, and as previously posted, I have acquired the urge to dable with Steampunk.  Certainly to begin with I will be focused on figures only and in this respect Reaper and an Australian company, Twisted Miniatures, are coming up trumps.  I really do fancy doing one or two little dioramas along the way as well and have a few ideas but nothing concrete.  Much rests of finding the right figures to begin with.

I am keen to participate in one or two competions again this year with the first being my club annual event to be held at the end of this month.  Retiring the models I submitted at Telford in November wiped me out so it will be very difficult to do well at the club this year as I haven’t had enough time to replace them.  After the in-house Plymouth Club event it’s the club hosted show in June followed by Cornwall in September and Telford in November.  For now time is on my side to produce a single figure under 54mm, a mounted figure under 54mm, a vignette of upto 6 figures, a fantasy figure under 54mm and two dioramas one of which will be a fantasy one.  A tall order but at least I have some ideas of what I want to do.

Somewhere along the way I would like to expand upon the Apocalypse models I have done as these were fun to do and I will need to do a few cowboy figures along the way in order to keep my brother happy!  On top of that there is the guilt pile, all the must have stuff I bought but which sits there looking at me as if to say “you bastard!”.  I’ve promised my self I will make a concentrated effort to get a lot of the stuff done but then again I promised She Who Must Be Obeyed that I would cook once a week and that’s never going to happen either so we will have to wait and see.

Painting figures for sale on Ebay will continue.  It has really helped me to practice my painting while at the same time completely self funding my hobby.  It also keeps SWMBO of my back and that alone makes the whole thing worth the while.

Two things which have become apparent though.  Firstly, given some of the models I want to do it isn’t going to be possible I think to turn out something new every week.  That said I still want to keep the blog going so expect a few more “work in progress” posts.  I’ll try to keep them as interesting as I can.

Secondly, I need to think about my WordPress memory and the need for archiving older posts.  No need for immediate action but thinking about how to deal with it has given me an idea.  It struck me that very few people who start to follow a blog look back on old posts, they simply start where they pitch in and move forward.  With this in mind I’m thinking of a new weekly post called “Memory Monday”.  I did toy with “Flashback Friday” and do prefer the name but thought posting Monday made for a more even distribution.  Then again I could call it “Flashback Friday” but post on a Monday!  In any event the idea is to re-post older articles and give them a second lease of life to a slightly wider audience before archiving them to a new site I am going to call “TIM Gone By”.  However, this all needs to be thought through and once I have gotten my head around it I will let you know.  Hopefully this coming Monday will see the first post.  The trouble is neither one of my tech savvy kids are about when I bloody need one!

Does refusing to go to the gym count as resistance training?  Asking for a friend.

Thought I would work my way through my CD collection with the emphasis on playing stuff I haven’t listened to in years and forgot I had.  Expect more blasts from the past!

“Secret in Their Eyes” a film I recorded over Christmas.  Can’t say I knew anything much about it but it was watchable and had a twist at the end which I didn’t anticipate.

The human body is roughly made up of 60% water … you’re not fat you’re flooded!