This weeks miniature is a 28mm figure from Reaper, a young lady who goes by the name of Kristianna and who lists her occupation as a Crusader Warlord.  I suspect she had no problem getting through passport control, assuming any of us can remember that term these days!  When you buy this figure it comes with a little lad too.  As far as I can see he is not named so I don’t know if he is a son or some sort of aide but it’s all irrelevant because I haven’t painted him yet, not even sure I will but I wont rule it out completely (I have). 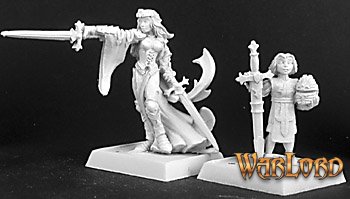 As always with a single figure I am finding it harder and harder to say much about them these days.  The paint job was straight forward enough and I didn’t have it in me to do any freehand.  Perhaps I need to start making up some character blurb to go with it?  Not sure I have the imagination that others do for that sort of stuff but one to ponder perhaps.  Which is typically my way of saying I wont do it.

Back in the days of the first lockdown it was as, far as I was concerned, a fun time.  The sun was shining, the roads were quiet and most people were scared shitless so we had no holiday makers to speak of in the South West.  All in all life was pretty good but for the threat of impending doom.

Now the UK is part way through the second lockdown and so far I can’t say I am enjoying it much.  Don’t get me wrong I am playing my part once again and following all the rules but the weather is crap, the days are short and I spend most of the time trying to get my waterproof clothes dry in readiness for the next dog walk.  Oddly I am getting less modelling done too which quite frankly is bazaar.

Sequels are all to often a disappointment and this one is no different.  On the positive side there is much talk of a vaccine.  I wont be top of the list to receive it when ever that is but my age shouldn’t put me at the bottom either.  In any event the time frame is some ways off so it looks very much like the sequel will in fact become a mini series.  Here’s hoping none of us find ourselves in the boxed set.

This week I thought I would go for films with a war theme set earlier than WW2.  Go back as far as you like.  In no particular order I ended up with the list below.  Again I suspect age comes into this.

“I Love It” by Icona Pop.  Even at my age I can bounce to this one.  Any record with the lyrics “I don’t Care”, “You’re from the 70’s but I’m a nineties bitch” and “I threw your shit in a bag and pushed it down the stairs” works for me.

“TheGood Liar” starring Helen Mirren and Ian McKellen.  I do like Helen Mirren in particular so this was a must watch film for me.  Very enjoyable.  A twist was expected from the very start which gives nothing away but the story line shoots off in an unexpected way.  I’ll say no more.

Two can keep a secret if one is floating down the river.