The Pros and Pros of Oil Paints

The May Day Bank Holiday provided some glorious sunshine which resulted in me sitting in the garden rather than modelling.  Instead I sat warmly in the shade (I’m fair-skinned what can I say?) watching a series of videos on YouTube aimed at painting basics.  Before I go further let me be clear on something from the start.  I am not, and never will be an expert modeller or painter.  I can however improve particularly as I am essentially self-taught.  I mention this because even watching videos on the basics I still find myself learning things or at the very least reminding myself of things I no longer do but arguably ought to.

So, why is this relevant to the title of this post? Well, two-thirds of the way through the list of tutorials the narrator started talking about “Wet Blending and Layering” techniques which it turns out I am familiar with but not by those names (in truth I didn’t even know there were names for these things).  The principles behind these techniques if I understood correctly is to achieve an end result which provides a smooth transition from one colour to another as particularly relevant to shading and highlighting.  The narrator went on to say that these techniques were in his opinion amongst the hardest to learn due to the fact that acrylic paints simply dry too quickly.  He went on to explain how to achieve Wet Blending but to be honest I had already switched off a little having decided this wasn’t for me right now.  Why?  Because I’m happy to use my oil paints to achieve these results.

There are in my opinion a lot of myths surrounding the use of oil paints for modelling and so I thought I would produce an article to expel some of them and explain a little of what I do and why.  I also thought if there are people who struggle with Wet Blending because it’s as difficult as the guy said then perhaps trying oils as an alternative might work.  So, in no particular order …

Myth No: 1 – Oil Paints are Expensive

Wrong!  A Winsor & Newton 37ml tube in the Winton Oil Colour range will set you back about £2.75.  In contrast a 17ml pot of Vallejo Game Color will cost about £2.45.  Ah I hear you say, £2.75 is more expensive than £2.45 and you would be right but for one little thing.  Except for three colours, my oil paints have over two-thirds left in every tube and are as good as the day they were bought which was over 30 years ago!  Every model which appears in my Gallery, and that’s not everything I have ever done by any means, was either fully or mostly painted using these paints.

All in all I have 16 tubes of paint.  Two of these, Paynes Grey and Sap Green I never use.  The best Grey’s and Green’s are mixed, so really it’s 14 tubes.  From these 14 colours I can pretty much mix any colour I want using my colour wheel and because they are oils they stay mixed without drying out for as long as I need.  No need for a wet pallet.

The only three colours I have ever replaced, just once in each case was Burnt Umber, Titanium White and Ivory Black.  If I only painted figures I would not have needed to replace them but these colours, particularly the Burnt Umber, I have used a lot for base work.

Myth No: 2 – Oil Paints Only Produce a Gloss Finish

Wrong!  There are mediums wich can be added to produce a matt finish but the easiest option by far is to put out a small amount of paint onto a piece of paper and let the paper absorb some of the oil.  It is the oil that provides the sheen so once reduced it becomes more matt.  Matt varnish at the end of the painting process will also dull down any sheen.  Adding a little bit of white spirit or thinners keeps the oil paint extremely pliable if you remove a lot of the oil.

Myth No: 3 – Oil Paints Take A Long Time To Dry

Wrong!  OK, they can take longer but there are things you can do to speed the process up.  The first thing is not to put too much paint on in the first place.  It is easy to be heavy-handed with oils but the paint goes a long, long way and is best applied in thin coats in much the same way as acrylics.

The other thing you can do, and this is how I tend to paint, is to use the acrylics, particularly for the larger paint areas as an undercoat.  In this way the acrylic will absorb the oil and thus speed up the drying time.  Anything I paint these days only has to be left over night at the longest and to be fair that would probably apply too if you were batch painting so what’s the big deal?

The figure in the images below (apologies, not the best of photo, figure looks darker than it appears in the flesh!) was painted using a mixture of oil paints and acrylics which has become my preferred technique for 28mm and took a couple of hours in one sitting (yeah, yeah , yeah if I’d taken my time it would have looked better!).  It hasn’t had matt varnish applied.  I chose this figure and its colour scheme deliberately to show that you can paint a very light colour (white) up against a strong colour (blue) without merging the colours.  I’ll break the figure down in terms of how it was painted later in this article. 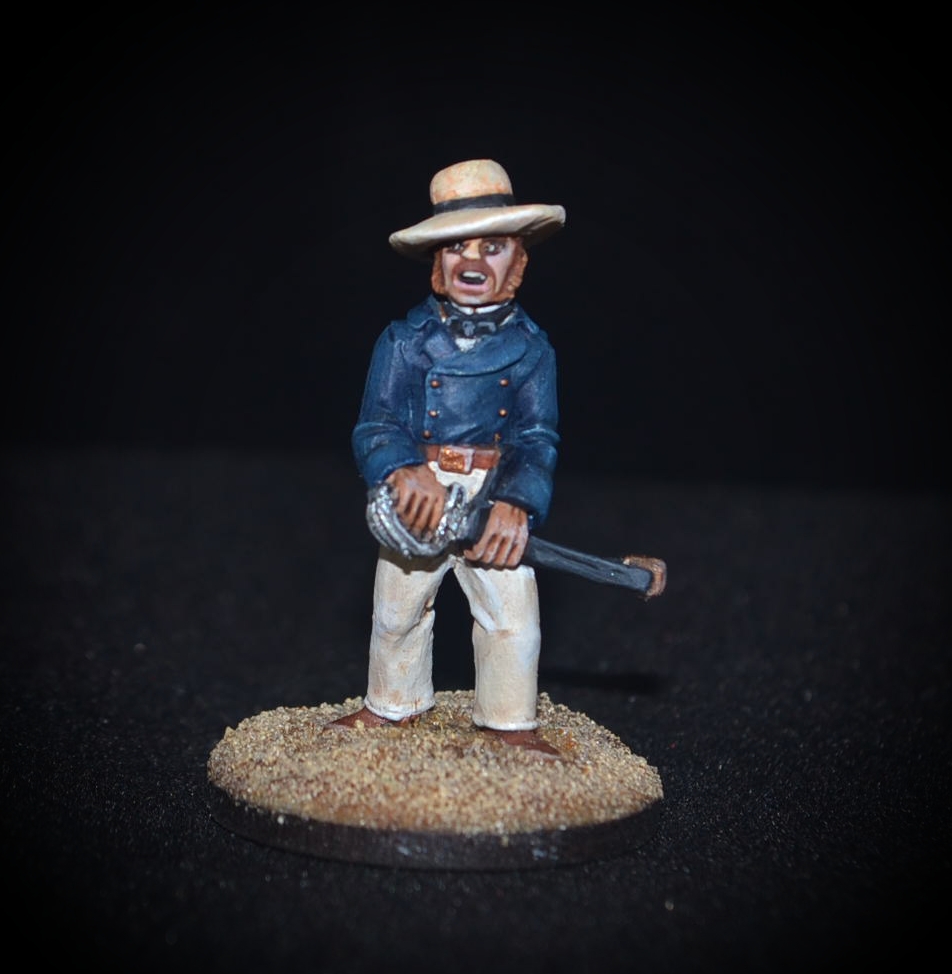 Wrong!  Oil paint goes where you put it.  It can be used for dry brushing, diluted to make effective washes for those very fine areas of detail but above all, and this brings me to where the idea for this article started, it can be easily blended!

The whole point of oils in modelling is that it can be blended easily.  Put two colours next to one another and they wont run into each other.  Take a brush and run it between the two colours and before you know it you will have created a smooth transition from one colour to another.  Yes I am over simplifying it, it’s a techniques like everything else of course and therefore needs practice but get it wrong and you just wipe the oil off and start again.  There is no danger of the paint drying out so you can add dark or light colours a little at a time to achieve the shade or highlight you are looking for.

The end of the Myths?  That’s something you will need to decide.

Meanwhile a closer look at the little chap above.  A 28mm Artizan Alamo figure, William Travis.

When I started to paint 28mm scale figures I soon leant that there was a need to adjust the way I painted, mainly due to some of the very fine detail.  Washes in particular became important.  I also started to try out acrylic paints which until then I had never used.  The idea of not using oil paints didn’t sit well with me as I had been using them for years so I started painting using both mediums.  The figure below is such an example.

After initially priming the figure with white primer the first task was to paint the face.  This was done entirely using acrylics.  The jacket and the trousers were initially painted using blue and white acrylics respectively.  The jacket was then painted with a blue/black oil paint mix and a dry brush was used to remove excess oil paint to ensure a thin layer of paint only remained.  Black was then blended into make the shadows and a little white to creat the highlights.

The trousers were given a very diluted wash of burnt umber oil paint and then white oil paint was added to the raised areas for highlights. 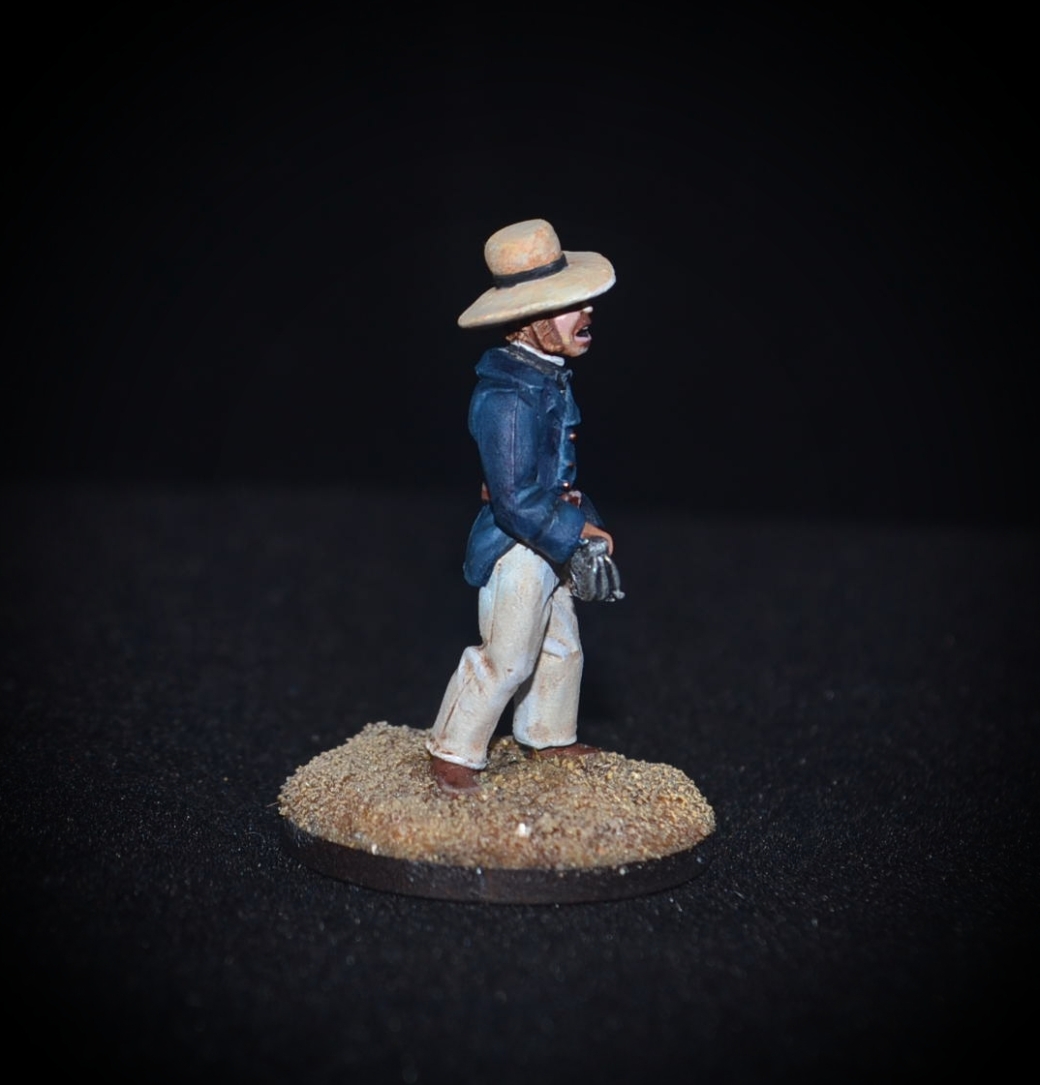