Welcome to this weeks Musings and to 2019.  Happy New Year to you all.

This being the first week of the New Year it seemed appropriate to review the modelling year just gone.  So, where to start?

Well the first question I guess is just when should a year end review take place, just before the end of the year (as some of you have done and excellent write ups they were too by the way) or at the dawn of the new one?  Well, after much soul searching I reached the conclusion that it doesn’t much matter at all and I suspect none of you could give a toss anyway.  Besides I expect you are all still nursing hangovers even though this is 2019 day 2.

So, where to start?

Looking back I surprised myself with just how many models I actually produced.  Whilst a long way short of the numbers that Azazel and others produce I managed to create 35 or so vignettes and dioramas along with a good many stand alone figures which I couldn’t be arsed to count.  No wonder I’m struggling to find a home for all of them!

Overall I’m pleased with most of what I done but there were disappointments.  Not everything works out the way you hope.  An idea which seems exciting at the time can unfortunately look shit when finished.  One such example was a little diorama that I put together called “Lights, Camera, Action!”. 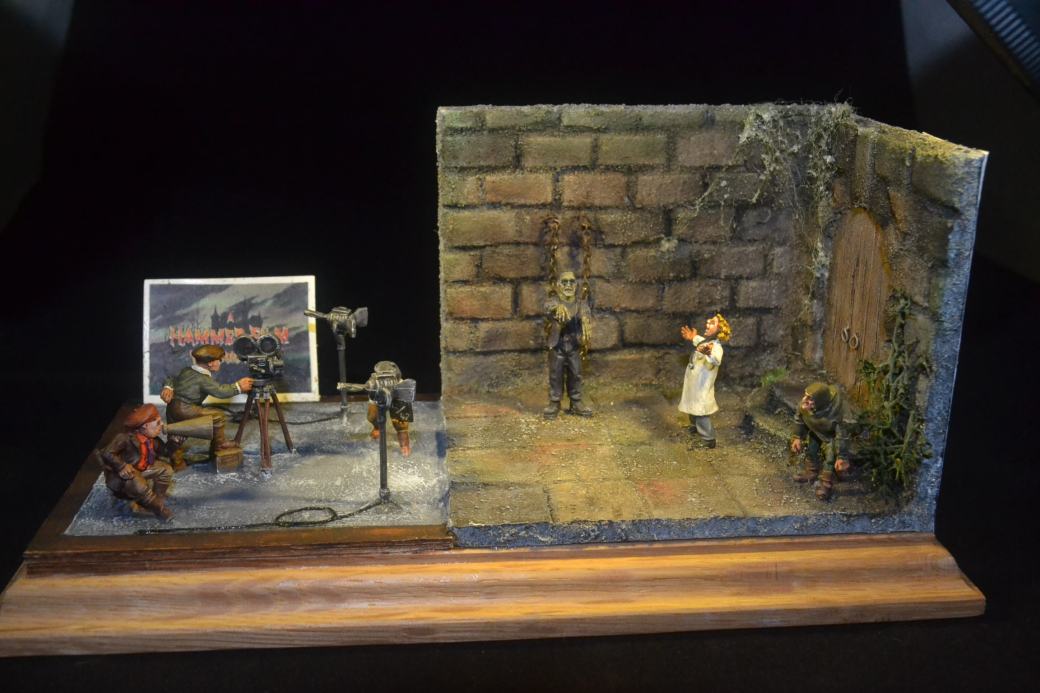 It wasn’t so much that the end result was that bad, more a case of it not turning out the way I had imagined it.  Definitely a concept I’d like to revisit at some point.

On a more positive note the WW1 timeline figures which I started in 2017 and completed in early 2018 were, at the time, quite a departure for me and one that I came to enjoy.  They also helped to establish myself at the Plymouth Model Club which was also significant on a personal level.  I also dabbled throughout the year with Reaper fantasy figures, another area which a year or so ago I would never have thought about doing.  So glad that I did, really enjoyed doing those and in particular the freedom of colour choice.

Do I have some personal model favorites?  Well yes I do.

“Fantasy Island” caused a bit of a stir at the time and represented my 100th blog post.  It provided something of a challenge to do and was a little different as well.  I entered a couple of competitions with it getting two third places which I was happy about, particularly as I had never entered any competitions before. 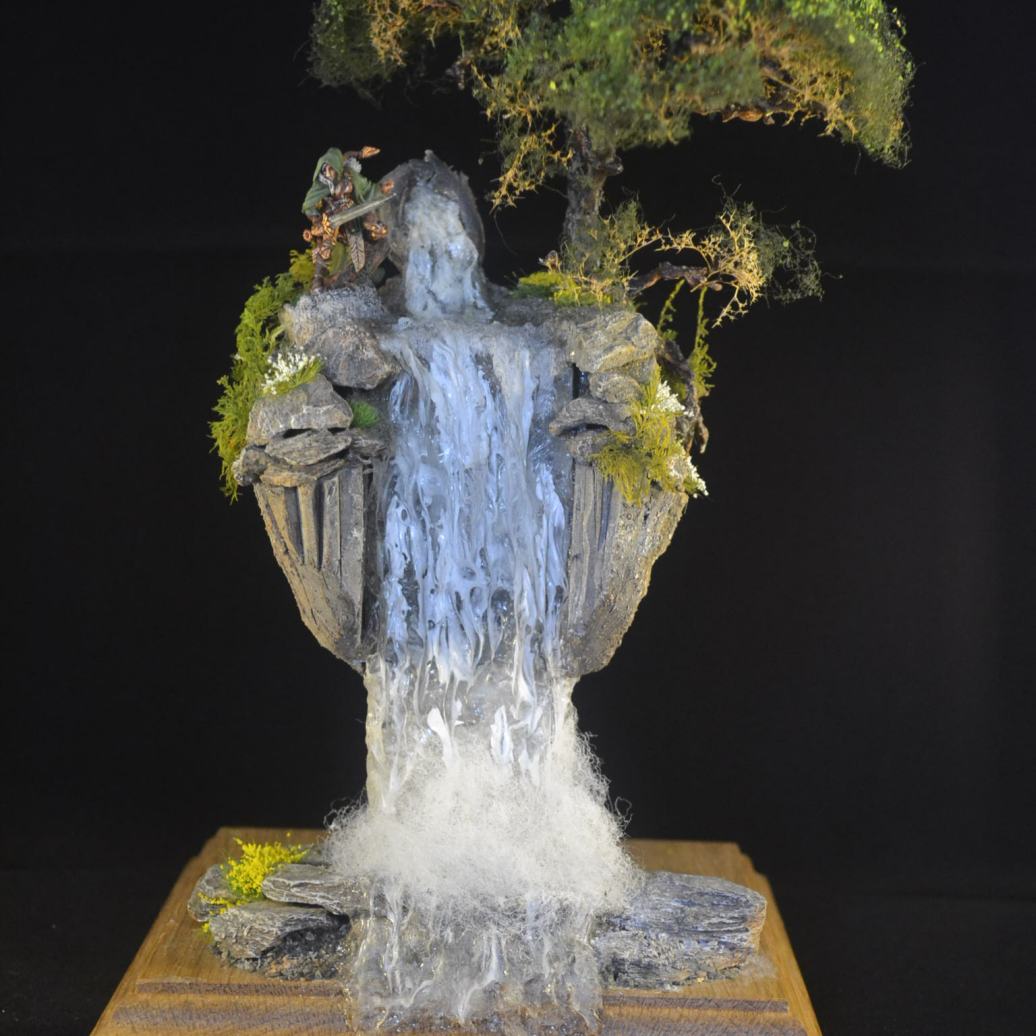 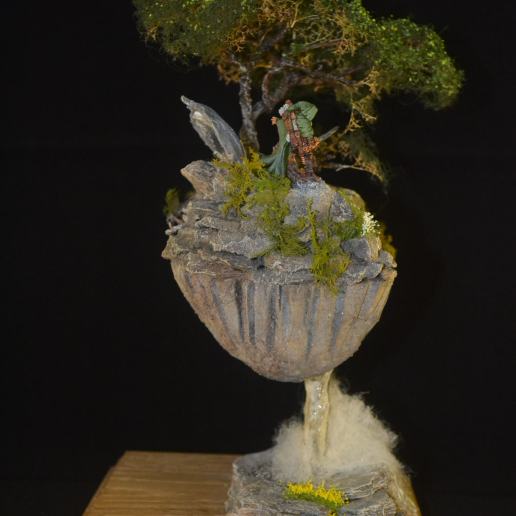 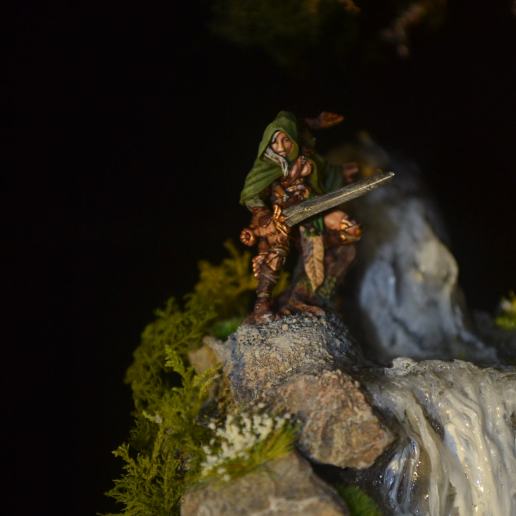 Another favorite was “The Dragon Slayer”.  Another fantasy based model which again provided something different and I loved doing this one from start to finish.  I even surprised myself with how well this one turned out (probably shouldn’t say that, a bit like laughing at your own jokes).  Seems this one went down well with the viewing public too, with 85 views, 58 comments and 25 likes it’s been my most successful post to date.  Looks like another dragon is on the cards.

My aim is to enter this one into a couple of competitions in 2019 and although I don’t expect to win anything I will be interested to see how it gets on and what other people think. 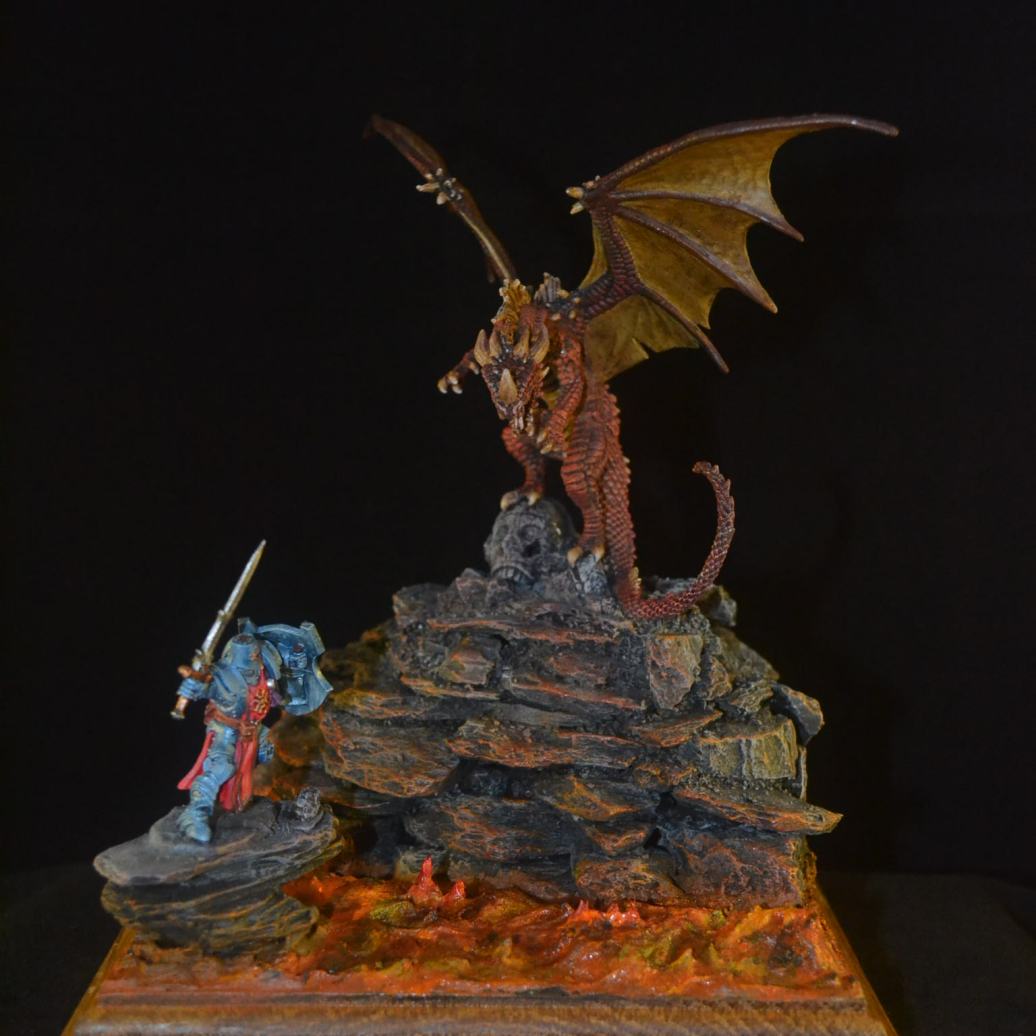 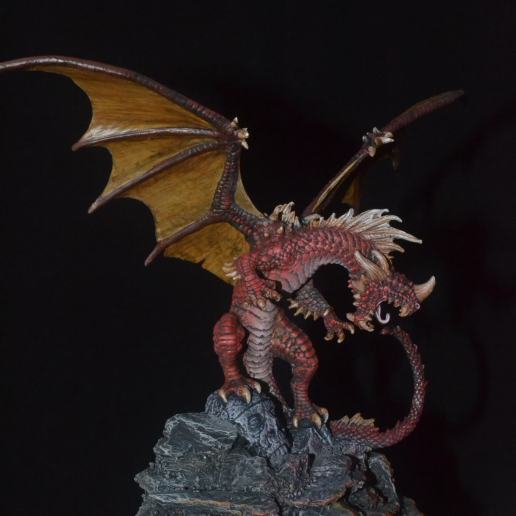 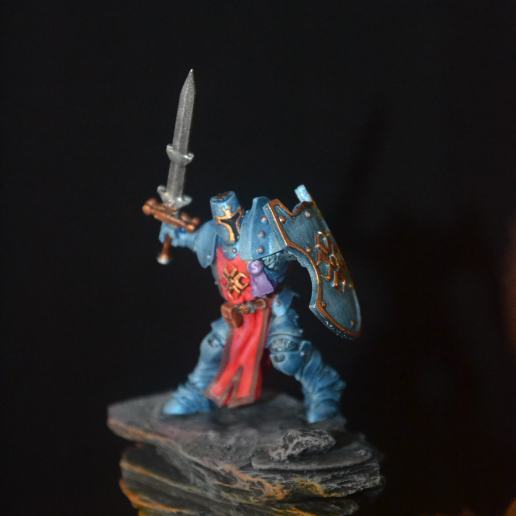 Last of all, and possibly my personal favorite was Rooster Cogburn.  A return to my Old Wild West roots and 54mm scale.  It had been a while since I did a 54mm figure and the difference between painting at this scale and 28mm is significant, well to me it is.  Painting horses using oil paints is a joy and this one came up pretty good.  How good we will have to see.  Another possible competition entrant but the standard in the single figure class is amazing but hey, if you don’t buy a lottery ticket you can’t win can you? 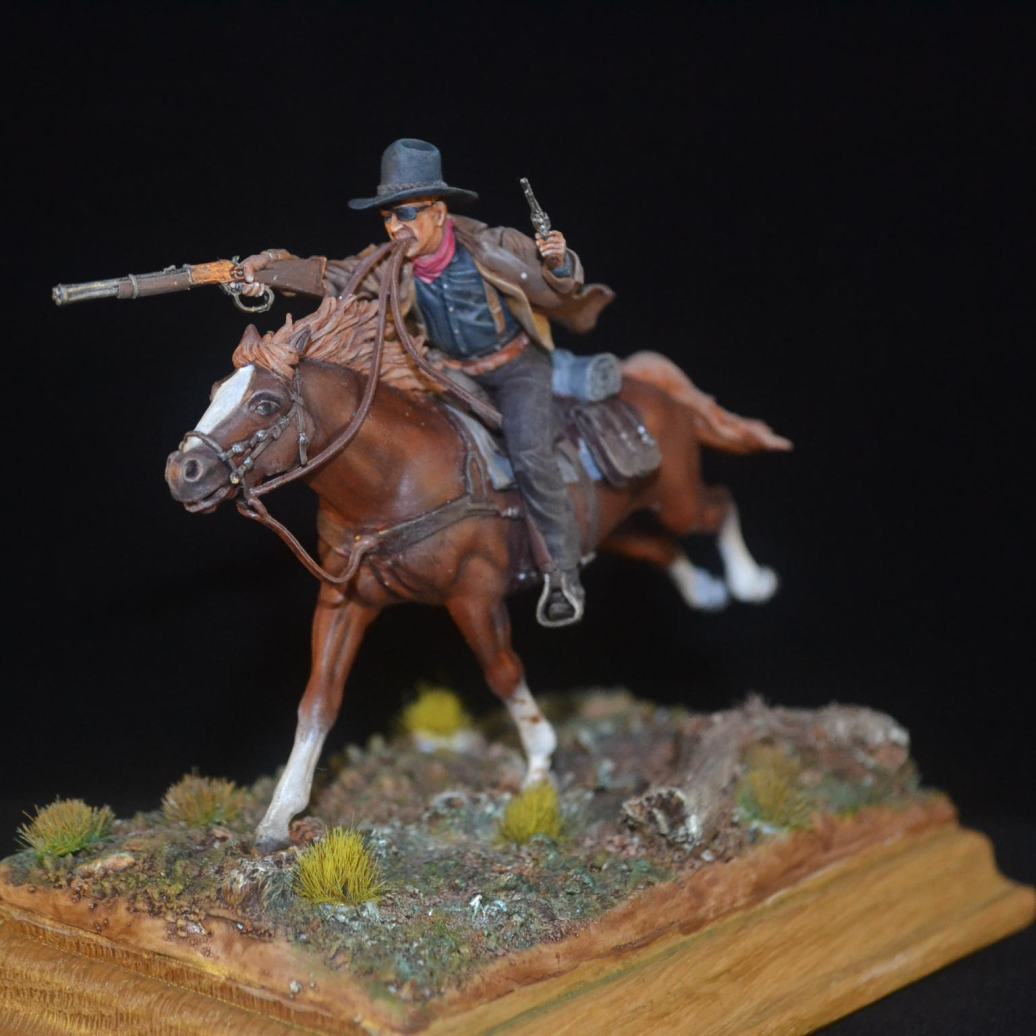 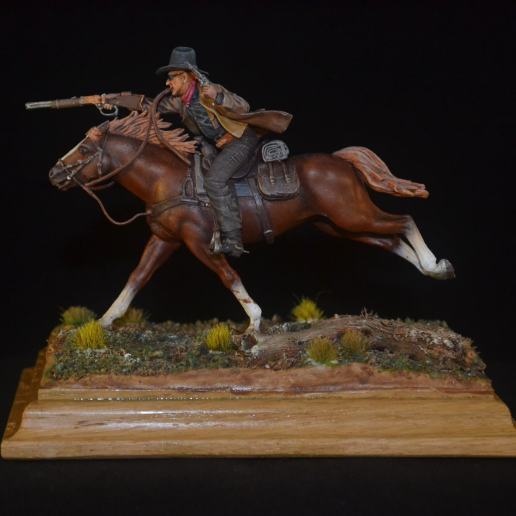 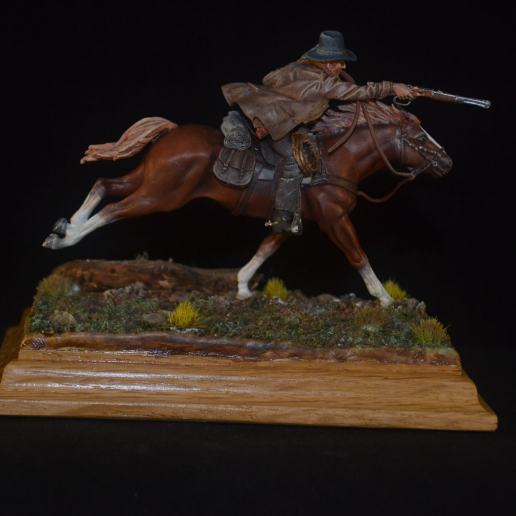 Last year also saw me trying out some new techniques.  Making trees and buildings mainly come to mind and if the tutorials I also put together have been helpful then that is simply an added bonus.

My blog itself has grown a bit too.  I have a few more followers than I did this time last year and whilst I will never reach numerical dizzy heights I do love the banter with those of you who participate.  Not just banter but some great feedback and ideas too, valuable stuff.  It’s tempting to list you all but I will end up leaving someone out which will piss us both off and then I’ll get abuse and lose a follower and the world as I know it will cave in and I just don’t need the aggro at the start of the year and neither do you.  I have enough of that from She Who Must Be Obeyed and from my 15 year old daughter She Who Thinks She Should Be Obeyed Too (if you have ever seen the film “Uncle Buck” you’ll have some idea of where my daughter’s attitude is right now).

I will however just make reference here though to Azazel’s monthly challenges as they are inspirational and motivational to us all and I hope to participate in as many as possible throughout 2019 although January is looking extremely dodgy already.

Publication of my modelling memoirs – This Is Me! – caused me some angst.  Should I or shouldn’t I? In the end I decided what the hell and adopted the Fleet Street maxim of publish and be damned.  On reflection I’m not entirely sure it was a great idea but fuck it, it’s too late now!

The News at TIM – Mid Week Musings continues to surprise me.  Firstly because it’s still going and secondly because they get more views that my model posts.  Has to be a message there don’t you think?  The aim of my Musings is to try to put a smile on peoples faces and create the occasional debate and if that only works every now and then that makes it worth while to my mind.  The world needs more fun and if I can add to that by generating the odd smile here and there then so be it!  Perhaps this year we might even be able to crank it up a bit.  Remember I’m Ginger, you can have fun at my expense too!

Last of all but by no means least comes the Plymouth Model Club.  I continue to enjoy it.  It’s been great fun and meeting interesting people at various events has been an added bonus.  The competitions have also been enjoyable and I managed to pick up 3 silvers and 3 bronzes from the two I entered.  Maybe next year I might be able to go one step further but it wont be the end of the world if I don’t.  More than anything they are a source of inspiration and motivation just like the monthly challenges and if it helps me to improve then so much the better.

Next week I’ll try and put together a plan for the year ahead.  Of course it wont be worth the paper it’s written on but you’ve got to start somewhere.

If you have any thoughts on ideas for 2019 don’t be shy, feel free to comment.

Joan Jett and The Blackhearts and “I Hate Myself for Loving You”.

I thought I would dedicate this to all of you!

Fancied a bit of Rock and this young lady made for a pretty hot rock chick at the time this track came out.  Sadly I don’t think she looks a patch on what she used to and it’s not all down to age.  Shame. 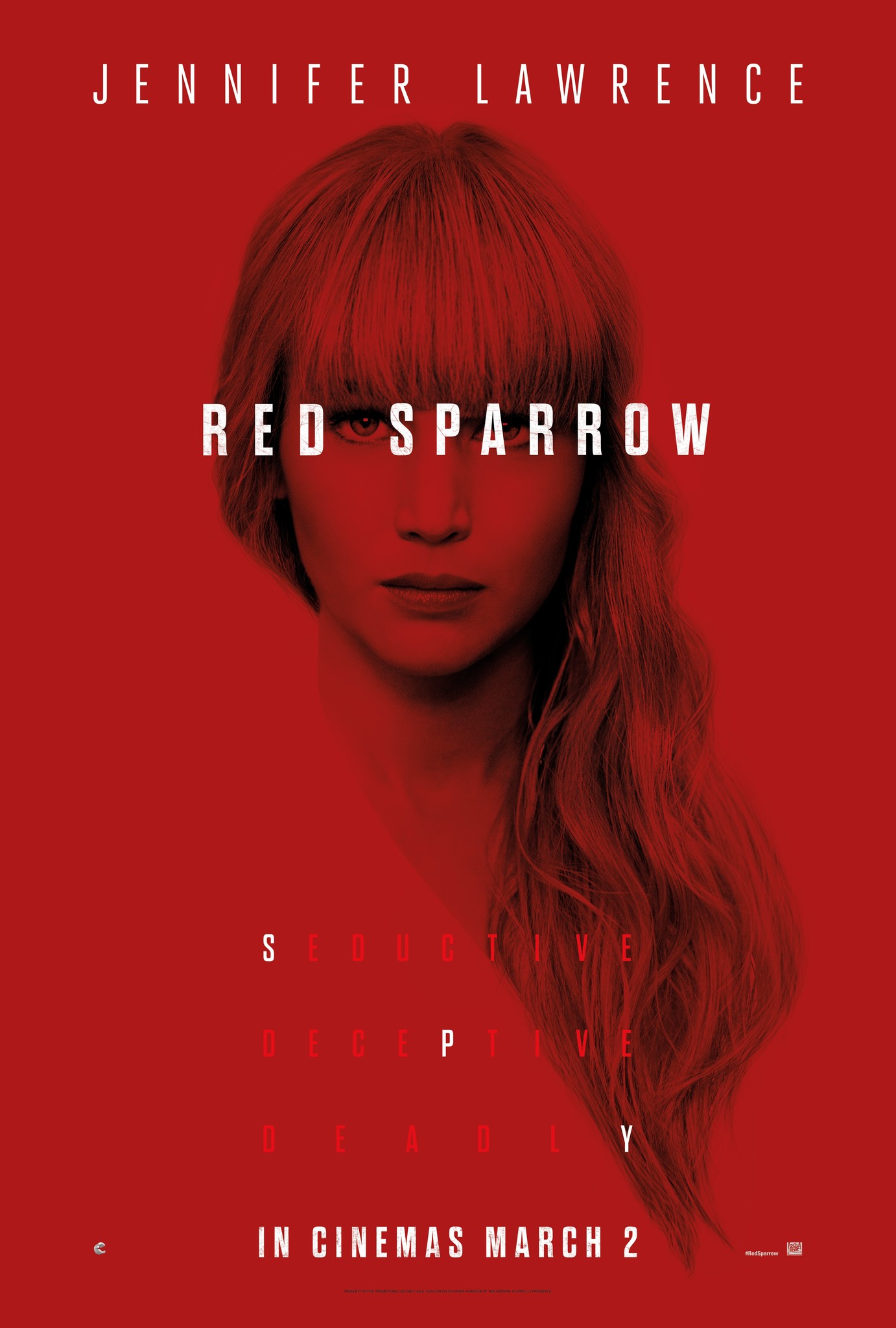 Knowing that the Christmas TV would be crap yet again I decided to keep this DVD on hold for something to fall back on.  After the parents went home, the wife nodded off and the daughter went back to hibernate in her room I decided to sit down and enjoy a couple of hours of watching Jennifer Lawrence.

I can’t say I knew a great deal about the film but the synopsis appealed to me so I decided to take a punt on it.  Turned out to be a real bonus.  Not only was it an excellent story with an unexpected twist at the end but Jennifer, a future Mrs TIM if only the planets would align (never let it be said I’m not an optimist) can be seen getting her kit off!

Until next time.  Happy New Year.