Back in October 2017 I put together my first and only boxed diorama using a Wild West saloon for the theme.

I had always planned to have another go at one but as more and more modelling ideas cropped up which appealed to me the more the idea got pushed back.  About six months ago the project reared its head again and I created an initial outline of what I wanted to do and followed that up by buying several bits and pieces to get things underway.  Everything arrived and everything was good but once again my mind wandered off to other things and the project was again cast aside.

So what is a boxed diorama?  Essentially it is the modelling equivalent of a stage production.  The audience only gets one view of what is going on, just like a theatre production there is no 360° view.

By my reckoning there are two ways to approach a boxed diorama.  Either you build a diorama and make a box to fit it or you buy a box and fit the diorama to the dimensions of the box.  As I didn’t fancy the idea of building a half decent box I chose the latter option.  Finding the right box with a vision panel cut into the front is a challenge in itself but fortunately when I bought the one for my first attempt I had the presence of mind to buy a second box as well! The down side of fitting to a bought box is everything has to be cut to size perfectly for later assembly.  Building inside a box, especially a small one, isn’t a realistic option unless the model itself is very simple.

I’m not entirely sure now where the idea for a diorama based on a “Wizards Library” theme came from but I suspect it grew out of seeing a couple of Reaper figures online which caught my eye.  Basing a diorama around a room also works well for inside a box as the sides lend themselves nicely to becoming walls.

Armed with a box, the necessary materials and a reborn enthusiasm for the project it was time to get started!

Using 2mm thick MDF boards the first thing was to accurately cut back, left and right panels which would line the inside of the box from top to bottom and act as removable walls for the external building of the diorama.  This done the next step was to cut out an MDF base that would sit inside the removable back and side walls.  For the mathematicians and engineers among you the MDF base would need to be 4mm narrower from left to right than the “actual” internal  base and 2mm shorter from back to front.  A test fit revealed that all was good.

Now when you look at the actual box you will hopefully notice three things.

The first two of these needed to be addressed.

In the case of the first the cut MDF base was raised to an appropriate height by gluing some wooden supports to the underneath of the base to bring the height of the floor up to match the bottom of the vision panel.

For the lid I cut a thick piece of card to act as an insert which will conceal the glass panel.  It will in due course be used to put the dioramas name on.  As for the lid space itself this will be used to house the LED electrics which I plan to install.  With only light coming on from the front vision panel the inside of the box will be too dark; my first obstacle.

I needed to add lighting which would be in keeping with the fantasy theme, which is to say I could not have exposed electric lights.  I ruled out the light source appearing to come from candles and/or a burning fireplace.  Although I like the idea I couldn’t see how to do it well and to produce sufficient light.  After much deliberation I elected to go for “sunlight”.  I created a false back wall to sit in front of the other back wall and added some windows to it.  The LED lights will be installed between the two back walls and hopefully the light will shine through the windows and into the library room.  To be sure of enough illumination I also built a roof with wooden joists so that more concealed lighting could be added if necessary. 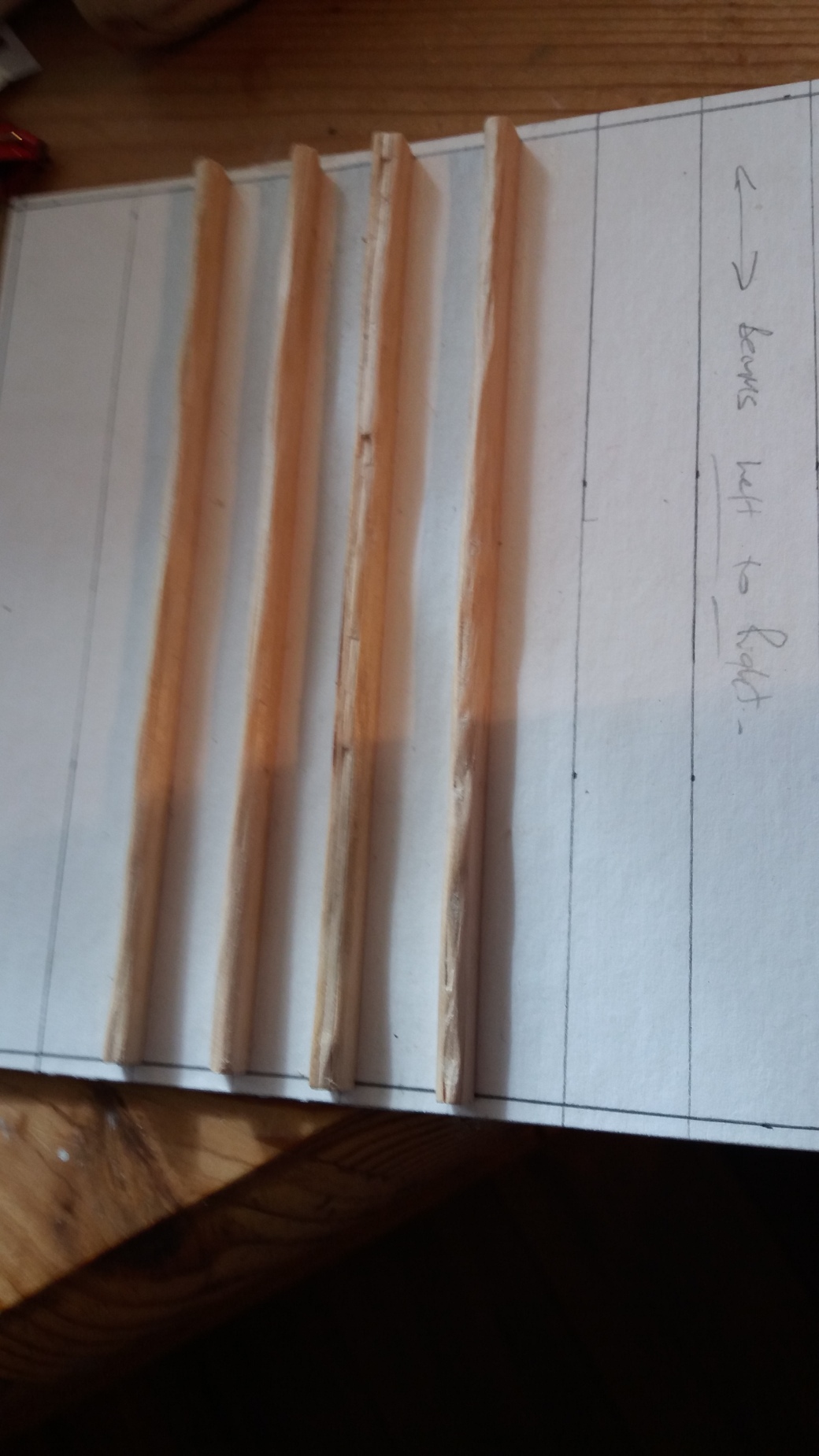 First two photos above are of the false wall under construction.  The fourth is of the ceiling with wooden joists being assembled.

My next dilemma was how to “construct” the walls and floor.  By construct what I mean by that was do I clad the MDF with wood paneling, brick, stone or something else?  In the end I decided to go with the same render type finish for the walls that I used on my D-Day buildings diorama so out came the chinchilla dust!

For the floor I had little choice but to go with cobblestones.  All three of the Reaper figures which will be used in the diorama were cast on cobblestone bases so the idea of making the rest of the base cobblestones pretty much chose itself.  This was done using Milliput and one of my Green Stuff World textured rollers.

It also occurred to me that having a raised floor at the back of the base would enable the viewer to have a clearer view of the rear once everything was assembled.

The cobblestone floor under construction. Steps added to the front of the elevated floor and to the left a base for the fireplace. 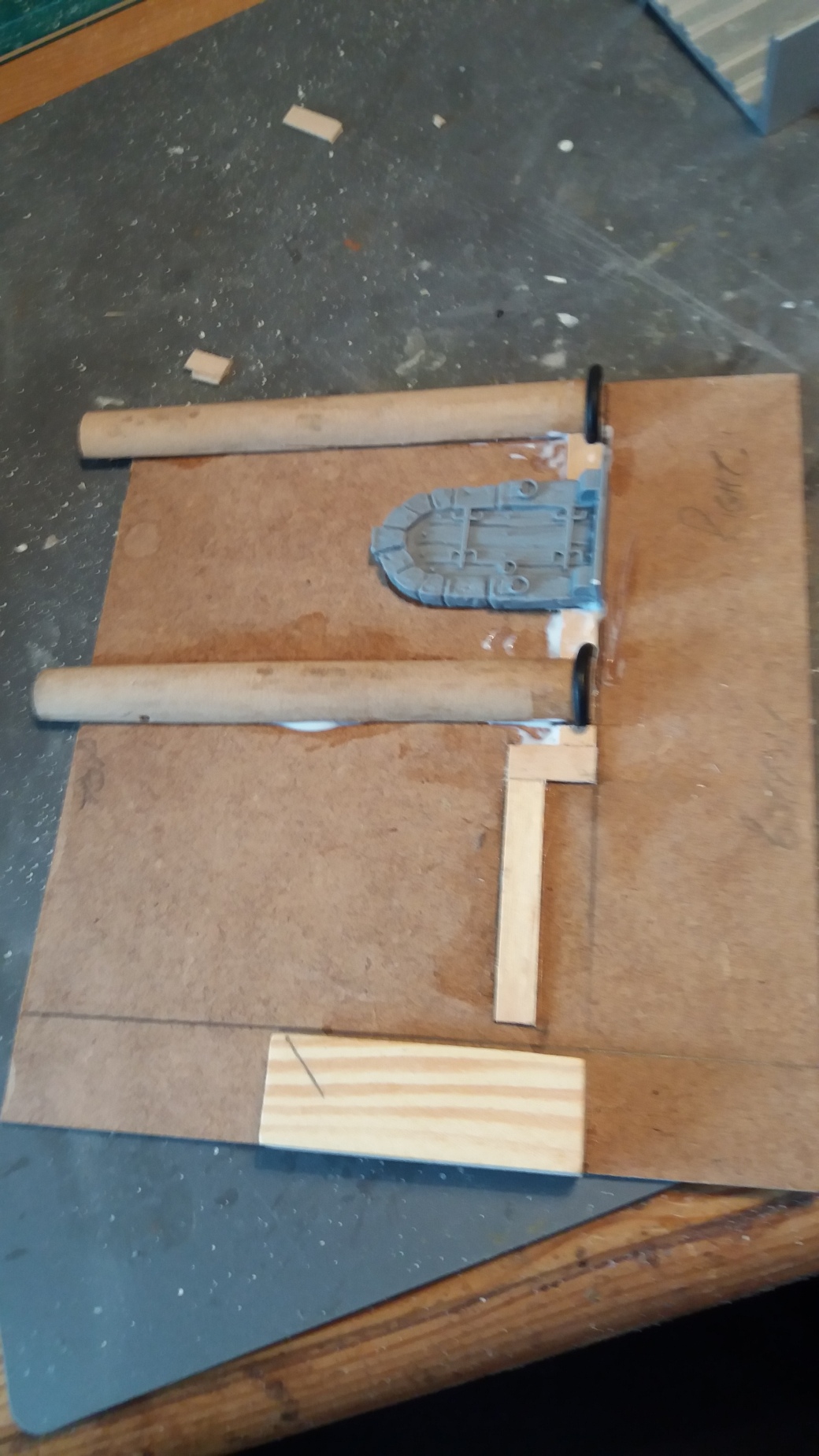 Top photo of left wall under construction followed by the right wall.  For the right wall the pillars were made from splitting a dowel rod and half a rubber washer for the base.  The third photo shows the false wall in situ for a test fit.

So far so good.  Phase 1 is complete.  I have walls, a base and a ceiling which all slide in and out of the box neatly and basic finishing has been applied as appropriate to each piece.  A long, long way still to go but I’m up and running.