This week I have another pair of miniatures for you, both are figures from Artizan and can be found in the Thrilling Tales range.  The first is their take on Indianna Jones which for copyright they elected to call Kentucky Davies.  The figure doesn’t come with a whip so I decided to make one myself.  The second figure is Herr Tohdt which is a take off of Nazi agent Arnold Toht who appeared in Raiders of the lost Ark.

I needed a few modelling consumables so I placed an order with Amazon.  In an effort to resolve one of life’s conundrums I also decided to purchase a chicken and an egg.

This Saturday just gone saw me attend my third show but only my second as part of the club, first time around I was simply a visitor.  An excellent day and well attended.  All being well the club will have made a reasonable amount of money which errs well going forward.

From what I was told most of the clubs from the South West area were in attendance and we also had two clubs who came over from France.  Some talented modellers from Caen in Normandy put on a great display and hopefully when I get to review my photos I will find that I have taken some of it!

I did enter a few things into the competition.  Managed a 2nd in the Diorama category, a 2nd and 3rd in Figures Under 60mm and a Highly Commended and a 1st place in the Miscellaneous category.  My Wizard Library was my 1st place winning entry which I was pleased with.   In all honesty I didn’t think it would win when I saw that I was up against an excellent scratch built model.  Generally, scratch built models done well, which they usually are, tend to score additional points giving them a head start which is difficult to make up so I was very pleased to have won.

As always met some great people, in particular a chap called Kev who does some amazing work and who I think administers a website called Planet Figure.  He invited me to join it as he thought my 28mm scale figures would add to the diversity.  He also encouraged me to attend a show called Bugle Call which is held in Bristol in November.  I said I would consider both but of the two I think I am more likely to do the show.

Next up is a trip to Cornwall and the Padstowe show on Saturday.  No competition at this one and a show I have not done before.  Still, should be fun.

… The Killers and “All These Things That I’ve Done”.

As the Killers were at Glastonbury at the weekend I was inspired to dig out and play the Hot Fuss album.  Classic.

… Legends of the Fall, starring Brad Pitt, Anthony Hopkins, Aidan Quinn, Julia Ormond and Henry Thomas (who has grown up a bit since starring in ET). 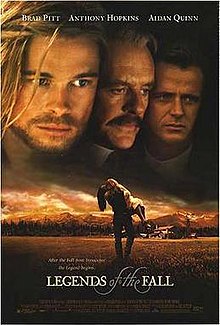 Without a doubt this is one of my favourite films.  I do like most genre’s but I do really enjoy sagas which span time and so for me they don’t come a lot better than this.  The cinematography is, in my humble opinion, stunning too.