This weeks 28mm figure is from Hasslefree Miniatures and goes by the name of “Lt. Thoran”.  Despite the fact I could have painted this pretty much how I wanted to I decided on a quick and rather dull grey.  In my mind it felt more like a realistic colour to go for and besides I have so much to do right now that it seemed the best option at the time.  That said it is a great little figure and one I will probably do again at some point and when I do I will go for a far more interesting finish.

As mentioned above I have got a lot to do right now, not just from a modelling point of view but because of the time of the year as well.  Christmas is a time for giving as we all know and this year I decided to push the boat out and give more to myself!

Now I am not entirely sure where the inspiration came from, my guess would be from images found on the “Pinterest” site, but I have been bitten by the “Steampunk” bug.  This is very much a new genre for me but I love the Victorian era and a bit of Jules Verne and H.G. Wells’ “War of the Worlds” is right up my street.  Some further online searching threw up a variety of figures and images which got my juices flowing and I promptly ordered a number of “Reaper”, “Dark Sword” and “Twisted” miniatures.

I think the appeal is in the detail of the figures, so much to pick out and paint and complete freedom of colour choice too.  If I have a dilemma at all it will be how best to base them in terms of a setting.  A small base will be easier but a little diorama offers more of a challenge.  More research is needed I expect but no doubt I will get my head around it in due course.  For now the orders need to arrive and as the “Twisted” figures are coming all the way from Australia I wont be starting anything this side of Christmas I expect.

Now if there is one thing She Who Must Be Obeyed is good at it is sleeping.  If it were an Olympic sport she could sleep for England and a Gold Medal would be as good as in the bag.  I am always the first up in the morning and come the weekend when our daughter, She Who Thinks She Should Be Obeyed Also, doesn’t have school to go to I will always go down stairs, let the dog out and bring SWMBO a nice cup of tea in bed.  Imagine my surprise therefore when Sunday just gone she was up earlier than me and brought me a cup of tea instead.

In an ideal world it would have been a moment to treasure but when she put the mug down on my bedside cupboard she caught my eye and winked.  Only a small thing I know but I’ve never been more scared of a drink in all my life!

“Atomic” by Blondie.  Back in the day Debbie Harry was directly responsible for the huge increase in Kleenex sales to teenage boys.

“The Blues Brothers” starring John Belushi and Dan Aykroyd.  A classic movie with a great sound track.  Based on a true story! 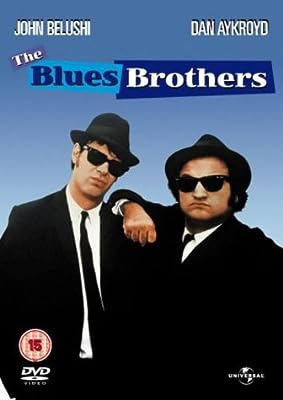